Most do not realize it, but half of the American army that fought at the battle of Trenton on December 25, 1776, marched though Bloomsbury on their way to join General Washington to fight in the battle that saved the American Revolution for the patriotic cause. The details follow: 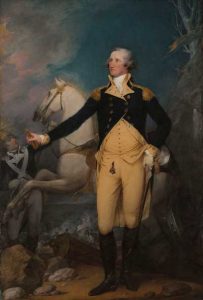 After the calamitous defeat in the Battle of New York, as General Washington fled through the “Jersies” with “the wretched remains of a broken army” he sent word for reinforcements to join him. The New England Army of Connecticut, Rhode Island, Massachusetts, and New Hampshire troops, commanded by the vainglorious General Charles Lee, was then camped in Westchester County, NY. Lee crossed the Hudson on December 2 & 3. Maj. General William Heath observed “that Lee took with him some as good troops (about 3,000) as are any in the service; but many of them were so destitute of shoes that the blood left on the rugged frozen ground, in many places, marked the route they had taken; and a considerable number, unable to march, were left at Peek’s Kill.”

The New England Army passed through Pompton, Chatham and Morristown on December 5, 6 & 7; camping at Vealtown (Bernardsville) on the 13th. Lee, who fancied himself a better commander than Washington, repaired to the widow White’s Tavern in Basking Ridge while his second in command, John Sullivan of New Hampshire, proceeded to Pluckemin (Bridgewater/Bedminister, near where I-78 meets I-287), where Lee indicated he would join them. However, local Tories tipped off the British as to Lee’s location and 80 British Light Dragoons, commanded by Banastre Tarleton, rode up from Hopewell and captured him in a fast raid. At this point command passed to General Sullivan.

Saturday morning (December 14, 1776) “the whole division, now camped at Pluckemin church, paraded for a march with all our baggage teams and waited till about 10 o’clock when we were informed that Gen. Lee and a French Colonel were taken prisoner and carried off. Then the whole division marched forward to Germantown (Oldwick) and lodged in the woods. Here the inhabitants refused to give us straw to lie on but we took what we wanted from them.” The army then marched up Potterstown Road (from the current Oldwick General Store) to the junction of the Easton Turnpike (present day Route 22), the only east/west road in the area, camping there on the 15th. (This is approximately the location of the current Spinning Wheel Diner, between Lebanon and Whitehouse) “The reception here was friendly. A family gave food to near 70 men, officers and soldiers, saying they had rather we should have it than the enemy who was expected there as soon as we had crossed over the Delaware.” At this time the British army was encamped at Bound Brook (where the Somerset Patriot Stadium is currently located).

On the morning of December 16th, the New England army picked up the Easton Turnpike, marching through Lebanon, past the current location of Miller’s Tavern, through Annandale, crossing the wooden bridge in Clinton, then known as Hoff’s, and over Jugtown mountain, via what is known today as Route 173, through Bloomsbury (the Easton Turnpike in Bloomsbury is now Brunswick Avenue) to Phillipsburg. They crossed the Delaware on ferries and mustered in the Easton town square where the sick were sent to the Moravian hospitals in Bethlehem. On December 20th, in the midst of a snowstorm, Gen. Sullivan rode into Buckingham at the head of Lee’s troops, having marched at a pace four times what Lee had set; but instead of the 4,000 that Washington Gen. Sullivan had been expecting, there were only half that number, and the men were in more wretched condition than even Washington’s own ranks.

Sullivan’s column formed the right wing of the American attack on Trenton on Christmas Day, 1776. Among his army was John Glover’s Gloucester regiment of fishermen. It was they who manned the Durham boats – obtained from Hunterdon County communities along the Delaware – when Washington crossed the Delaware. The triumph at Trenton, as well as the subsequent victory at Princeton, sent American morale soaring. Loyalist Nicholas Cresswell noted the significance of this event in his diary: “The minds of the people are much altered. A few days ago they had given up the cause for lost. Their late successes have turned the scale and now they are all liberty mad again…. They have recovered from their panic and it will not be an easy matter to throw them into that confusion again.” As Lord George Germain, King George III’s colonial secretary of state, lamented, “All our hopes were blasted by that unhappy affair at Trenton.”